Harmonizing the World – One Community at a Time.

April is my birthday month! While as many get older and start to dread their birthday, I’m all about celebrations. I mean what is the alternative?! I love any excuse to spread joy and happiness and that is what my birthday means to me. It makes sense as I am a Taurus, and I would go to any lengths for my friends or family. It’s a day not so much about me, but having fun with those I love around me.

Taurus is represented by the bull: stubborn, determined, reliable and strong. I thought it would be fun this month to make our spirit animal the bovine to include the bull’s relatives, the cow and the buffalo!

Here in Colorado the buffalo has tons of significance as it is the mascot for many of our sports teams. My team often drives by them on their way to work as our office is in farm country. This majestic beast always make me think of my dear friend Tanah who has a ranch in Montana. She has testified that after receiving the Washtub Harmonizer, the largest Harmonizer we manufacture, she has seen an incredible transformation of her land and most importantly, her animals. She claims that she does not worm or vaccine any of her buffalo and the entire herd has been disease free for years. A pretty powerful testimonial!

Tanah also tells a beautiful story about her Buffalo named Junior. Although he was about 6 feet tall and 8 feet long, he was still smaller than his father, hence his nickname. He had injured Victor, one of her farmhands. Since the incident Victor was terrified of the buffalo where he used to run freely amongst them. As the story goes, Tanah was at the farm when she saw Junior come over the hill and run towards the house. She immediately called to Victor and the rest of her staff as where one bull goes, they all go as a herd. She assumed they all must of broken through the fence. As time passed they learned Junior had broken through two of the fences by himself to return back to the ranch and left the herd behind. Tanah is convinced it was to make peace with Victor. She tells us that the buffalo taught her about harmony and how we are all, humans and animals, part of one family. 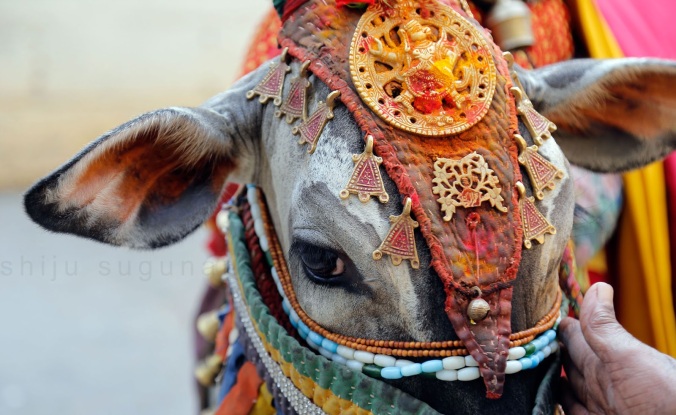 In India, they may take their love of the bovine even further with their devotion to the sacred cow. There are more than 3,000 Gaushalas that care for the cows around the country. It’s been reported that over 45 million cows reside in India. The largest cow population in the world!

I love the idea of adopting a spirit animal every month because it reminds me of the beauty of Mother Earth. We are so lucky to live amongst such gorgeous creatures. After Slim’s passing I’ve made it my mission to carry on his legacy. His purpose was to restore harmony and balance to the planet. If we would have a Harmonizer in every community can you imagine how beautiful our world could be? After all, our company motto is “Harmonizing the World – One Community at a Time”. Sending lots of love to all my fellow Taurus this month.

This site uses Akismet to reduce spam. Learn how your comment data is processed.

Theme by Anders Noren — Up ↑